The quality of the energy for the coming year is rosy in color, warm and pink-hued as in the glowing cheeks of children or in the blush of apples growing in the field. There is a warm soft emergence here – and you may want to call that frequency the feeling tone of love embracing you. Warmth and fullness.

You are stepping over the threshold in 2015, the space is opening and more freedom and clarity is infusing all of your beings. The kind of clarity that brings with it an excitement, a thrusting forward of the bursting shoots of spring that will come so soon.

More and more energy is being released into the etheric realms surrounding your world. This supercharged energy is permeating you and your awareness is quickening in pace with the new tide of life.

Now only the empty shell of the old is left like a dry husk on the riverbed. The New Earth has been planted with the seeds of your own vision and those of many beyond your ken. Greet them as brothers, for the turning of the world is happening in more ways than one. New world, new speech, new creativity, new words spoken into the growing edge of life. You all are part of that. Be at peace in this coming time of life.

I asked the guides of the Akashic Records to speak about the powerful energies of Capricorn and the Winter Solstice. This is what they said:

Visualize a spear of ice emerging from the core of the Earth. This spine of truth, of determination and of new clarity brings with it a huge surge of energy that has been confined and is getting ready to release.

This spear of ice is not physical but energetic and symbolizes the intense fulcrum of your winter passage, those of you in the northern hemisphere. It has the clarity of glittering light condensed into one shining moment, and has the directionality and forward thrust that is magnified at this time of turning.

This image is about rebirth- not yet of the plants but of the light itself, and of the energy of purpose and courage that is growing so much stronger in the hearts of humans.

This energy bursting forth from the confines of the Earth is here as a protection and a messenger of life. You hear it and many do. You are all being called to stand forth in your commitment, focus and purpose.

The higher value of Capricorn is to bring all your energies together into one sharp point where you can use them to cut through the ties of old meanings that have caught you for so long.

Use this clarity and glittering light to concentrate your minds and hearts on the new, what is emerging, what is calling you to attention. You have stepped into what is emerging – you have called it forth as much as it calls you.

Bringing your passion and love into harness of the courage and focus it requires to accomplish true change – that is what you will be witnessing more and more in the coming time.

Freedom requires honesty, courage, purposeful commitment and living a new song, entering a new life. All this and more is being given you now. 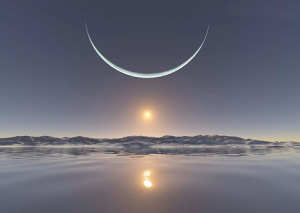 This is amazing. We’ve actually come full circle and are starting a brand new cycle of New Moon Magic with another Capricorn New Moon.

Rather than wait for New Year’s Day to make your resolutions, you should do it on Sunday, Dec. 21st – or in the 2 days after that.

Why? Because this New Moon – and particularly the Solstice – holds the energy that supports your intentions for the entire year of 2015!  It is very powerful, so take advantage of this mega-energy volt.

One teacher of the sacred, Lisa Michaels, states: “Once I began designing my year in alignment with the big planning energy of the Capricorn new moon, everything shifted.” Wow!

The Solstice and the New Moon herald the rebirth of the Sun and the Moon after a descent into darkness. What a time to plant seeds! It’s a great time for ritual, reflecting on, thanking, and releasing the passing year and dreaming your most powerful goals into existence.

I don’t know about you, but I can’t wait to get my hands into the wet clay of 2015 and start molding it. Not a moment too soon. Especially since Capricorn rules all the areas of business success that I’m hot for right now. (“Hot” as in responsibility, discipline, persistence, achievement – not what most people consider sexy, but it sounds good to me.)

This is a super-intense Solstice/new moon also because along with the Sun and Moon, three other planets are cozying up in Capricorn – Mercury, Pluto, and Venus, adding their energy to the highly determined, earthy sign. (You know that Capricorn is the mountain goat who slowly and surely climbs the mountain and never gives up till he reaches the top.) Pluto adds depth and Venus adds the Divine Feminine to the entire year to come – yay!

And Uranus, the Great Awakener and revolutionary, goes direct right before the Solstice, which will add the energy of liberation and breakthrough to this coming year,  an urgency to break out of whatever has held us back and to stand up and be counted.

That’s why this is an opportune time to set your visions for what you truly want to achieve in the coming year. You will get lots of support!

Now that you know how powerful this time is, and that you can set intentions for the entire year, let’s look at how to work with the Capricorn energy.

This coming New Moon in Capricorn:

This New Moon in Capricorn (supercharged by the Solstice 2.5 hours earlier, conjunct with Pluto, Venus and Mercury) will help us get focused, structured, and disciplined  about our highest priorities, grounding our life and business in a step by step organized approach to achievement.

The areas to focus on when setting intentions include:

​Here are some tips for how to use the New Moon energy to plant effective wishes/ intentions/ visions:

​1. Write them by hand. (You might want to keep a New Moon Magic journal – that’s what I’m doing. Or you could write them on cards and keep them in a drawer.)

2. Choose more than one but no more than ten wishes or intentions. (To activate but not dissipate the energy.)

4. In phrasing your intentions feel free to say “I choose, I intend, I create, I wish or want to experience, I request, I ask for, I call to me……” or any language that feels right to you.

5. You might want to say them out loud after you write them down.

6. Some recommend lighting a candle.

Keeping our written intentions where we can refer back to them later, to see which actually came true, is part of this experiment. It’s also advisable to keep your intentions in mind, especially as the Full Moon approaches, the time for action. These intentions will also be powerful to review at the end of the year!

I have also created a NEW MOON MAGIC FACEBOOK PAGE for sharing our New Moon Intentions, if you’d like to do that. Please click on above link to join me there – and click “Join group” in upper right corner if you want to join.

I’m also thinking of offering a *free* New Moon Business Boosting Call each month, starting in January. Would you like that?

Wishing you powerful renewal, energy, and focus in accomplishing all your dreams in 2015!

I asked the masters and guides of the Akashic Records to speak of the challenge of finding one’s calling.  This is what they said:

Sometimes you fail to look in the most obvious place, expecting a more esoteric or difficult answer. Sometimes you humans make it harder for yourselves then it needs to be.

Why do you so frequently believe you are not enough as you are? That you must aspire to some higher image, as if God were not satisfied with you?

That is the exact opposite of the truth. In trying to fit a higher image, you turn from the very core essence of your self and your divine mission – which is truly to be yourself, just as you were made.
​
So seek closer to home. Look into what it is about you that you reject. Look at the most innocent, fresh, pure aspect of yourself, that which you call the child part. Recall the freedom, purity, and creative joy you had as a child and see where that resides in you now.

What brings that joy alive in you today? Where does the echo of child innocence live in your life?

Freedom and joy will be yours when you step into your soul’s path. It will not require you to change who you are, only to admit who you are. And to choose to step more fully into who you are.

So learn to accept yourself first. Then what you are here to do, give, and express will become radiantly clear to you.